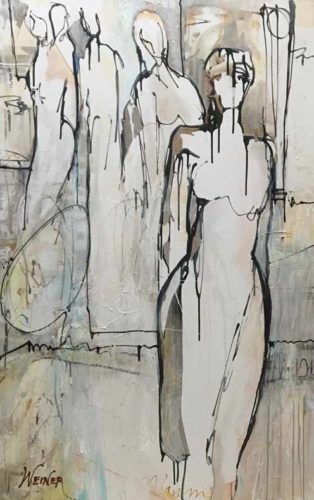 In the beginning was the Word,” wrote T.S. Eliot. Elaine Weiner-Reed begs to differ: “In the beginning was Art.” “It came so early into my life,” she says. “Art is a key building block of my identity.” If that’s the case, then Action is her middle name—a word she regards as both a noun and a verb. Self-described as an Action Painter, she frequently works on up to 10 canvases at once. Not for the faint of heart.

Weiner-Reed’s artwork springs from several intertwined themes, not the least of which is Identity. Born a fraternal twin, she was regarded as “half of a whole”–the female half, at that. After a while, Weiner- Reed was having none of that.

The ensuing search for the Self permeates her work. So does solitude, a recurring refrain for the past 15-odd years. It’s universal, she feels, to the human condition. Many of her paintings reflect this conviction, often expressed by a dominant figure seemingly disconnected from others in the same frame. We all walk a solitary path: “Each identity, each life, is independent of the other.”

That said, her creative approach focuses on the intricacies and scope of human interactions, “unraveling the complexity of human emotions, behavior and relationships.” (A pretty tall order for someone who laughingly admits to starting her artistic career thanks to Etch- A-Sketch.)

Layers of color converging with strong shapes and delicate lines play intricate roles. “I choose color for both emotional and intellectual reasons.” Not all is on the surface, however: “Active underpainting is critical to the entirety of the work, giving it life from within.” That said, layers submerge and emerge, surface and sink, creating both depth and mystery. The figurative merges with the non-figurative Expressionism of her generation. Point and counterpoint, conflict and calm, geometry and organica—such are the ingredients of Weiner-Reed’s repast.

One note—both striking and strident—is that most of the figures are female whose faces are all but featureless. One can only deduce that they are either silenced or voiceless or both. Then again, even if that were not the case, Weiner- Reed suggests that “no one is listening.”

For that matter, the mere choice of facelessness is intriguing. Their very blankness is in and of itself a mask. As such, a myriad of questions arise when viewing her work. Here again the subject of Identity looms large.

“I likened [masks] to our defense mechanisms for survival. Even a woman’s makeup is a type of mask… Like mirrors, masks are key to human existence–forms of self-preservation or protection.” With the mask then, comes the myth of our own making. Accordingly, these near-featureless faces have a universal appeal. Because Weiner-Reed is liberated from defining boundaries or demographic elements, she is able “to connect more people on a broader, perhaps global scale.”

Besides, she states, she is essentially a storyteller: “the stories become universal in their meaning, as a result of their being so personal.“ In her world, the voiceless speak. Antoine de Saint-Exupéry (The Little Prince) describes it best: “Even so, something shines through the silence.” 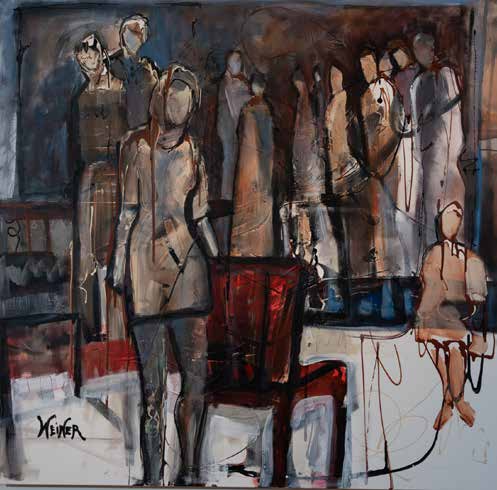 What shines through here is the artist’s “song” –an aria that scales the space between the abstract and the figurative, the ephemeral and the concrete. She “splashes, pours, scrapes, draws, and sculpts with paint and plaster.” Foreign materials—burlap, rope, wood, or wire—are still other strings to her bow.

If there is song, it is her own: both complex and mysterious, masked and muted, and, occasionally, boldly brazen. Hers is clearly a score composed in something other than the key of C.

If the mask is the “face” of her work, music may be its backbone. There’s a lyrical lilt to most of her canvases, a fluid, melodic arrangement of its elements. Jazz, (her “second language” along with French), is usually playing while she works. Not surprising then that her images and figures respond to a cerebral rhythm–visual fugues, jazz-based riffs. Faceless they may be; soulless they are not.

Spurred by an idea that recalls those who “see in sound,” Weiner-Reed popped the question: “How do my paintings sound to you?” She soon found out.

The first answer came front and center at an event that took place in the Chaney Gallery (Annapolis, MD) in June, during her most recent solo exhibition Masks and Mirrors – Explorations of Identity, aptly entitled “Every Painting Is a Song, ” (EPIAS). Played by an all female trio called Rogue Collective, their improvisations were inspired by four of Weiner-Reed’s exhibited works. Such are the first seeds of EPIAS, her ongoing project, meant to meld and inspire artists of all categories. 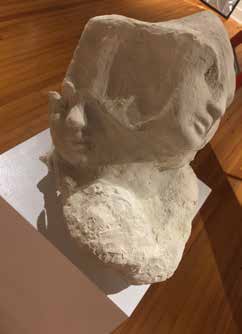 Enter sculpture. Or more exactly, re-enter. Weiner-Reed’s ongoing series, Phoenix Rising, is aptly named. Her predilection for sculpture, like the bird of myth risen from the ashes, is the result of her coming full circle in 2018. (Her first forays date back to her college years in the 1970s.) No longer limited by a two dimensional surface, “I feel like I, too, have taken flight.” So far three sculptures, Many Faces, Awakening and Resurrection, have taken flight with her, all completed this year.

“…[These] sculptures enable me to bring the reality of life’s struggles, of survival and identity to ‘life.’ ” As she sees it, sculpture supplies both a connection and a dialogue with the viewer simply by physically exploring it. 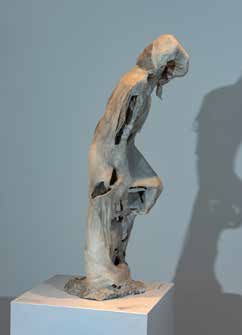 “It comes down to Action, again,” she realizes. “I want…to create a legacy that begins with my art and, from there, inspire others to find and express their own unique voice…in their own way.” Objective: a cross-pollination of the creative arts.

If, as Saint-Exupery asserts in The Little Prince, “one can only see well with the heart,” Weiner-Reed might agree. “Each painting” she affirms, “is wrenched from personal experience, influenced by dreams, and infused with emotion.” They are nothing less than “a portion of my biography, a self-portrait in the making.” —Diane Root

For more information on the work of Elaine Weiner-Reed, visit her website: elaineweinerreed.com