With life and words characterized by profundity cloaked in satire, the author’s quote about life’s path could not only be applied to his act of writing, but also holds true in describing the process of creation found in all artistic endeavor. This quote was most certainly apt when applied to the dual exhibit “Inner Sense,” seen at Jadite Gallery this past November.

Here, two artists, Virginia Donovan and Neela Pushparaj, both originally professionals in mathematics and medicine, present emotionally charged paintings of drama and grace bringing forth intuitive realizations. In their work, both start at particular points and end at unforeseen destinations mysteriously and spontaneously arising from processes, by no means just analytic, but so much more than the sum of parts.

Donovan, working in acrylics and mixed media, and Pushparaj, a watercolorist, share affinities in their abilities to express depths of feelings through brushwork on canvas and paper. With disparate techniques, Donovan, the painterly abstractionist, and Pushparaj, the exuberant floral painter, articulate mysteries of their souls in visual form.

Rendering anthropomorphic underlying images in strong colors on vertical axes, Donovan layers metallic and acrylic paints of monochromatic grays over them, adding and scraping away the strata to reveal parts of these forms. This process of repeated addition and subtraction of pigment from the canvas surfaces, through slashing strokes of palette knives, allows Donovan’s feelings to forcefully resonate with the viewer, providing images that are at the same time miraculously meditative.

A particularly mesmerizing painting is Donovan’s “Candle Aura,” where the underlying glimmers of a red-gold flame pulsate through the artist’s sensuous applications of dark umbers. One can see a flicker of light arising from the canvas surface as the artist builds her piece through physical deformation of the image. She told me her pieces are all about process where, through the creative act, she can communicate her interior thoughts so that, in the final results, intense and unvarnished feelings are accessible to the viewer. 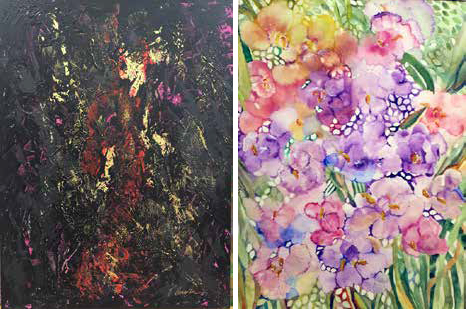 Although her paintings are highly expressive, Virginia Donovan, being trained as a mathematician, is able to provide underlying cohesive structure to the compositions so that the emotive imagery is tempered by logic. Throughout the years, this painter grew in expressiveness and she told me she is strongly influenced by the work of abstract painter, Calvin Edward Ramsburg, absorbing through observation his vigorous painting process. Now, with the technique currently employed, she is able to provide a complete iteration of both intellect and emotion. And, so too, her analytical skills and painterly wisdom combined in her role as co-owner of The River Winds Gallery in Beacon, NY, to help the gallery celebrate 14 successful years.

Sharing Jadite’s walls with Donovan was watercolorist, Neela Pushparaj who also applies quantitative skills, gained in her professional life in medicine, to her abilities as a painter. She admitted to me that she was a frustrated horticulturalist and with a past akin to that of her fellow exhibitor, and although her technique differs from Donovan’s, she shows similarities in that she paints from within, working spontaneously and trusting emotions to lead her to satisfying conclusions in her floral pieces. She did not know her journey’s destination, but her ebullient personality sustained her throughout the creative act, ending in glorious results.

Pushparaj was greatly influenced by the California watercolorist and teacher, Barbara Nechis, and although her compositions show tighter color modulations than those of Nechis, both artists work with masterful control so that their brushwork demonstrate simultaneous delicacy and strength.

Filling the paper surfaces with the brilliant colors of cheerful garden inhabitants, Pushparaj’s initial goal, as an artist, is to provide viewers with calming, joyful pictures that can be used for healing in hospitals. Her studies in sumie technique helped her start to paint flowers spontaneously and she told me she doesn’t perform preliminary sketches, the blooms just pouring from her brush based more on feeling than forethought. Her paintings, miracles of composition and color, blend detailed line work with the forms so that compositions show both constraint and exuberance, uplifting those viewers fortunate enough to see them.

Pushparaj said her creative process was informed by studying the watercolors of John Singer Sargent, particularly in his manner of color application and manipulation of the white of the page. This is most evident in her painting, “Dance of the Iris,” where fluid layers of sensuous color, juxtaposed with knowing handling of white and all elegantly contrasting delicate washes of pink and purple blooms, with intricate green and white surrounding patterns, combine to create beautiful movement across the painting’s surface.

A departure from Neela Pushparaj’s artistic exuberance was found in her very moving watercolor on handmade paper, “Goodbye My Love,” dedicated to her late husband who recently passed away. In this piece, bare branches drift away from the blooms, drawing the viewer’s eyes to the edges of the paper in wistful, melancholy passages stretching across the diagonal of the piece; the flowers, somewhat muted with a central grouping of pale red petals, intimate the heart’s grief at the dissolution of a beloved into timelessness.

I greatly enjoyed seeing the works of these two painters, each different in medium and technique but similar in stirring expression. Both wrestle with the inexplicable creative process where initial marks on canvas or paper grow from wells of underlying feelings into fully realized invocations of new forms, inhabiting what was once uncharted territory. In their acts of painting, Virginia Donovan and Neela Pushparaj end up exactly in the right place which, although mostly unplanned, is where they ultimately intended to be; and, I was glad to have the opportunity to be there with them.