I’m here to let you know that Bruce Rubenstein is still at it. Still making art, and still making challenges for viewers (and reviewers) who like to pigeon-hole and oversimplify artists and their work, putting them into categories that are easy to deal with. Well, Rubenstein won’t stand for this. His artwork will always sneak away from categories, running away around to the back door and upstairs to the roof, or back to his studio, where they will tattle on categorizers to Bruce himself. And deservedly so. It doesn’t work. When asked to look at his work and say something about it, I will confess this is what I initially tried. I put on my analytical and overly academic reviewer’s hat and set to work like Kafka in his cubicle. Yikes.

I tried to devise some kind of impressive mathematical algebraic analysis, which would take care of things quickly. I started by formulating a concept of different axes, ‘X-Y-Z,’ of increasing theoretical complexity, like in those torturous high school math classes. In my first attempt, axis ‘X’ was a linear, geographic movement, a line from New York to California, like Rubenstein himself has made. First, I was going to say that his artwork defies regional categorization, but frankly, that doesn’t mean as much as it once did. Rubenstein himself, despite his years in California, seems very much still a New Yorker. He has a kind of nervous edge that you see in people on the NYC subway platform, late for work with no train in sight. But this is an honest, open nervousness, based less on angst and anger, than on simply wanting to get where one is going and on wanting to be part of all that’s happening in that big, congested, magical City. Very unlike the confined, repressed L.A.-traffic-jam energy, that simmers inside a sealed automobile until it explodes at a sudden and unexpected instant. Yet at the same time, he seems completely comfortable in the warm world of California, as he should. Because sometimes for artists, New York can be just TOO all-encompassing, when the focus is lost and the impossibility of being part of everything happening becomes frustratingly apparent. Maybe. That was axis ‘X’.

Then I tried to jam him onto axis ‘Y’. This was a historical axis, from The Past, up through the meeting point of these imaginary lines in The Present, and onward into The Future. After looking at a good number of his paintings, I thought back to the past, to the shapes of Arp, Tinguely, Miro and others of this ilk, seeing similarities of line and form. But it quickly became apparent that there were huge conceptual differences, that Rubenstein is not so much an abstract painter, but rather he just utilizes some of the same shapes as those gentlemen. What he does with them is completely different, giving them dimension, making them look not like flat planes, but rather organic shapes. Why would he do this and where does it lead? Is it because he doesn’t ‘feel’ abstractly; because he wants things to have particular shapes and structures? His forms venture along sinuously, just as the stem of a giant vine snakes along a jungle floor, leading to explorations of its structure from one branching leaf bud to another. I even had visions about grabbing this vine and trying to pull it out straight, just to spite its natural convolutions. Makes me think of the Amazon snake-hunters I encountered in Peru who stretched out captured boa constrictors just to measure them and see how long they had grown. But you can only do that with a dead snake, and Rubenstein’s paintings are anything but dead.

Then I saw other painted works of his that seem even more complicated, though maybe not necessarily as organic. How did these fit in? What if one said that they were still organic; like the inside of a computer circuit board was organic, since the traces of copper on a brightly colored plastic board, though made by machines, were all made ultimately by people’s minds? Maybe there is something organic about these forms because they suggest the activities of human life? Perhaps what they really evoke is much more random and unpredictable; not computerized life, but rather the life that made the computers.

I started to think that there is a metaphor being presented here, for the complications of our modern life. These other patterns of Rubenstein seem to be in motion ceaselessly, like the activity on the city streets of New York, where he spent his earlier years, or the Los Angeles freeways where he ended up. Are they variations of this same energy? Are they creating tracers and tracks of modern motion in all directions at once, with endless sounds, activities, and visions: telephones ringing, Twitters tweeting, voice messages being left and then recited back, texts arriving to bleeping sounds and being returned dangerously and illegally while driving? Really, what’s too complicated now that multitasking is no longer a jargon word, but a way of life? I started to give my own names to the paintings that made me think this way: ‘Instagram Painting,’ ‘Twitter Painting,’ ‘Text-message Painting….’ But this was no good because these things are in all of them. They all have all of these elements and more.

Perhaps they even suggest communication techniques not envisioned by Steve Jobs or Bill Gates. Perhaps Rubenstein is thinking 10 or 20 or more years into the future, when there will be circuitry inside of people’s bodies, and humans who communicate invisibly, without holding small wafer-shaped glittering metal plates in their hands or plugging into their ears small white plastic slabs with strings hanging out of them…. If this is what a future might be, is Rubenstein imagining that? Or, at this point, after looking only at his paintings, did I subsequently think that predictions of the future would be much too dry, academic and critical for him? It was starting to seem that the ‘analytical’ approach was leading to an endless string of questions, and not much in the way of answers. I never really got to axis ‘Z’…………. 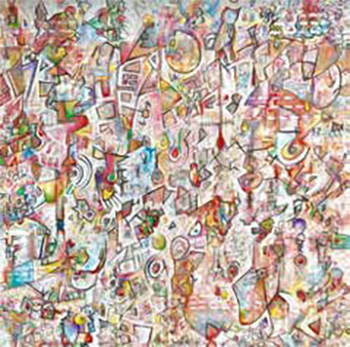 Investigating further into his work, many more objects in different media seemed to emerge and unfold like sudden flowers; assemblages, collages, three dimensional wall hanging pieces. Now, even more, was happening! With these additions to the oeuvre, these other creative objects to consider, the idea of using a particular medium to reference his work was utterly undermined. But instead of feeling confused about this struggle to analyze his work, I started to feel free. Much freer! What’s more freeing to see than an artist putting many different media to work, throwing out ideas, sending them leaping around, circling in the air above his head, dancing like birds as they flutter in the blue sky and fresh air?

Then, suddenly, I had an answer. At last, in a video interview with him, he said so very casually the one thing that made it all click for me: that each of his works is a story. This is as simple and basic as it gets. This is what made superfluous all the analytical gyrations. He laid it out, and it became clear. Forget the overanalyzing. All that has to happen is this: we sit down in the chair where we belong, Rubenstein the storyteller stands up in front of us, and in his New York accent, begins the telling of tales. He begins to weave his associations, connections, evocations, as only a true storyteller can. What’s more natural than tales told among one’s fellow humans? Like with the neighborhood guy you always run into by the deli on the corner, in any of hundreds of neighborhoods in Brooklyn, the Bronx, or wherever, who grabs you for his audience and won’t let go, this is the face-to-face storytelling encounter. This is the part of New York that is so inherent, (and not always easily encountered in California), which is in the deepest part of Rubenstein’s makeup.

Of course, the stories emerge not just from his two dimensional wall works. He probably has rooms full of sculptures somewhere that he doesn’t let just anyone see; those are some very special stories, and you have to be ready. And even more adventures beckon, at night in the City. Imagine screenplays? Oh, sure, he has… One filmed sequence of his involves an artist rappelling off the side of a building in the middle of the night to paint a huge piece of artwork on its windowless flank. (Our storyteller will gladly make this daring extra effort to tell you this particular story.) In the film, when the police arrive to enforce their categorical legalizations, compartmentalizations, and limitations on his process, he refuses. High above them, out of reach, he just climbs back up his rope to the top of the building and gleefully waves a middle finger at the frustrated and helpless officers down below, before disappearing behind the parapet….. That’s the image of The Storyteller Bruce Rubenstein that I like the best. He is an Artist, and that means someone who cannot restrain the flow of ideas. He is someone who they just burst out of, who cannot help but communicate, and who sees no reason to stop. He’s a man not limited by media to communicate the stories that he needs to (and must) tell, through any medium he feels necessary. When I kept encountering more and more of the styles and layers in his work, two names came to mind: Gerhard Richter and Pablo Picasso. Like them, more media only gives him more and more opportunities to communicate and tell his stories. He is like this because he just can’t help it. His paintings are so large and unrestrained because the stories are larger-than-life. He can’t confine himself to small canvases or the sides of small garages. He needs the whole wall of the whole building. The world is so big for him; he’s got to communicate all of its size and complexity. And looking at mere photos of his work seems far too limiting, for they are inadequate to convey the massive words and stories that tumble out.

Maybe the only solution is to just get a plane ticket to Los Angeles and go look him up at his studio and see the work in person, experience all of it. But knowing Bruce, when you get there, he might just be temporarily missing from his studio, maybe out in the middle of the Mojave Desert with a new collection of bulldozers and earth moving machinery, carving shapes into the Earth, since he feels he has stories to tell about moving the Earth around. Good, I hope so. Or maybe it’s the Earth that’s telling him the stories. Either way, because I’d be happy to wait there at his studio door for him, with a cold beer or two for when he gets back……………….