Andre van der Kerkhoff can rightly be described as an agent of change. Short of taking up residence on another planet, he has changed just about everything one person can: his name (from Heinz Krautberger); his country (from his native Austria to his present home in Australia); his professions: (from graphic artist/set designer to bonsai cultivator; from writer/poet to photographer to painter); and from styles to subject matter. He is nothing, if not versatile. He is also a self-taught artist—no thanks to a dismissive and disapproving father. He had his first “real” exhibition at age 14. Clearly, he was not one to follow the beaten path, and he still doesn’t. “I always have rebelled against norms, and I was easily bored by uninspired teaching formulas,” he says. “I think I have always created work that is my own, containing references interpreted by my search for something new.”

This man on the move with a chameleon-like life is endowed with a porous personality able to absorb, adapt and recreate the world around him, sharply observed and keenly felt. His poetic/prose/photographic portrayals of New York City, during which he roomed at the Carlton Arms, a hotel located in the city’s then grungy, ungentrified Lower East Side, is a case in point. (It still exists, now adorned by van der Kerkhoff’s murals.) It is also where he launched into taking a big bite out of the Big Apple.

His camera depicted the city without a glimmer of glitz or glamour. Van der Kerkhoff is fresh out of city slickers, debutante damsels or Chanel-clad courtesans of the upper crust. It is dressed down to the nitty-gritty of its streets and its darker denizens, unvarnished portraits populated by the fringes of a society from which we often avert our gaze. His moon shone on the misbegotten, the wayward and the woebegone, the forlorn and the godforsaken. If there is a cutting edge of veracity, it is not without compassion illuminated by a silvery sheen.

His photographic works are streetwise, peopled by the likes of pin-ups and prostitutes, flashers and fast-moving passers-by, seemingly insensate and oblivious to the surreal of the city, the solitary figure, and the erotically charged– from bimbos to buildings, from femmes fatales to faceted façades–a devastating picture of the stricken post-September 11th city in a striking social commentary.

Don’t just look, he told us, see. He is still telling us that. His surroundings permeate him as readily as rain beneath his peripatetic feet. His latest move to Australia, where he has resided since 1986, has spawned his latest permutation after a ten-year hiatus during which he cultivated bonsai trees. “Sometimes,” he says, “one needs time out…the art of bonsai is a great occupation to find peace and ideas for an artistic renewal. I am a funny man. I can’t do two things at once: when I write, I can’t paint; when I paint, I don’t bonsai; when I bonsai, I don’t write.” 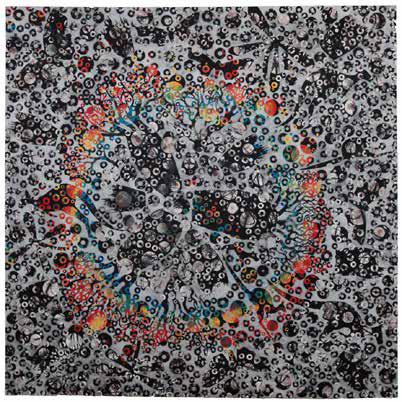 He returned to art with an astonishing vigor; 95 paintings created in eleven months is no small feat. “I just painted and painted and painted until my studio was full to the breaking point.” Ranging in sizes from 24″x24″ to 70″x70″, they often layer mixed media on Belgian linen– oil, acrylic, inks and enamel—sometimes up to seven options on the same canvas.

Enter aboriginal art, stage right. Despite not exploring it and having had only a minimal contact via art galleries or art magazines, as he professes, it must have left an impression upon him, however subconsciously or unintentional. “When I did this series, ‘Where Dragonflies Tango,’ I didn’t set out to produce anything aboriginal…. I do my art,” he explains, “and unconsciously it contains a spiritual language that is visually linked to the Indigenous Interpretation of this Continent’s Landscape. Aboriginal people might feel a connection within my visual expression, but would not call it Aboriginal painting….It isn’t traditional or native art!”

That said, aboriginal art does appear to be a fertile ground upon which van der Kerkhoff has sown his cerebral seed, weaving a tapestry all his own—a homage of sorts–an echo of a culture not his, but now internalized.

The dragonfly and the butterfly are among the myriad of shapes that conjure up insects, turtles, lizards and snakes, flight paths and trajectories; floral-type patterns recall the woven millefeuilles backgrounds of medieval wall hangings; circles string coiled pearls in a nebula of another universe.
There is a mystery encased in these images–a hidden tale told in still another poetic language tinted by other landscapes. Landscapes he has made uniquely his own, rendered in earth tones, a “palette [that] reflects the pigments of the Australian Continent,” he writes.

A quasi-musicality and a rhythm inhabit these latest works, a near- repetitive refrain, somewhat reminiscent of some “outsider art.” But van der Kerkhof is no outsider. His is a reconstruction of an Australian fabric emanating from a melody within, heard by a stranger in a strange land. He is a stranger no longer.

“It would be rather strange,” he states, “to live in one of Earth’s oldest landscapes and not be interested in it and its unexplainable power and magic. There is a culture present, which has understood this landscape for thousands of years and become one of the most remarkable interpreters of it….For me landscape is life, and I try to find a compromise between the two different landscapes which have so far dominated my life.” In so doing, he has enriched and embellished our own landscapes, with a perspective that we had not suspected, through a window we did not know was there.

Like many who wrote about him, the word “dream” is one that recurs, even when he describes himself—a wanderer with “half a globe between dreams.” Dreams are the seams, it would seem—beautiful veins on the leaves of a life well lived, tracing the artist, resurrected and reinvented.

A man of many voices, he has created a magical mosaic–an inner territory crafted from multiple far-flung “landscapes” where we wander and where we, too, are drawn to dream. For someone adverse to the all-but-sacrosanct Artist’s Statement, Andre van der Kerkhoff is nonetheless outspoken. His art is his statement. For once, words, other than his own, seem almost superfluous.

He may be half a globe away from some of us, but Art, thank God, knows no distance. —Diane Root

“Voyage Through My Window” is a survey of Andre van der Kerkhoff’s journey through the Australian Landscape from 1997 to 2017. The exhibition is brought to you by the CARPORT CAFE GALLERY and SMART ART BASTARTZ. Opens September 9, 2017. http://www.andrevanderkerkhoff.com