Lumen Martin Winter (1908-1982) is an artist almost unknown today. The rediscovery of this artist is not as uncommon as one first thinks, with artists who have spent a large part of their careers as muralists. In this exhibition at The Harness Racing Museum & Hall of Fame, in Goshen, NY from June 1, 2015 to May 31, 2016, The Spirit of the Horse, one sees drawings and watercolors that Lumen Winter created in Santa Fe, New Mexico. These artworks show the strength and vitality of his oeuvre especially in his drawings. In 1939, Winter settled in Santa Fe, NM establishing a summer studio (although one newspaper article states he was regularly visiting Santa Fe as early as 1929) and he was inspired by the New Mexico Jemez Mountains and Truchas Peak located in the area. In 1965, Winter had a studio in Santa Fe on the Old Pecos Trail. He repeatedly depicted these landscapes in watercolor, drawings and oils in all seasons—thus showing an artistic evolution of the cacti, the Chemel Sage and the wild horses that predominated in these areas. Winter’s artistic thinking–comparable to the French Impressionist artist Claude Monet’s repetitive depiction of haystacks in all lights and seasons—is similar to his painterly evolution in showing Nature in various lights and shadows. 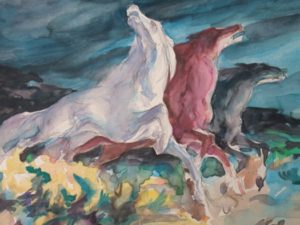 Winter turned to the wild horse as a subject matter in these mountains and landscapes. These wild horses represented a physicality of brute nature, an ascension to freedom and a quality of the American character—grit and perseverance—that Winter treasured. Skip Mulfalli, who was a model and assistant for Lumen Winter in some of his figures for the Saga of the Santa Fe Trail at the Kansas State Capitol Rotunda, stated that Winter said “When I paint a Horse, I want you to smell it!” 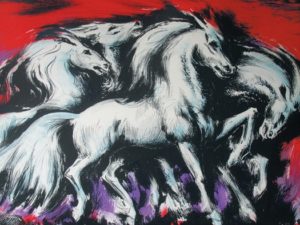 As Winter said, when asked about his bas-relief mural of St. Paul the Apostle, NYC, why he included a bucking bronco in the mural “… My Horse is deliberately an American bucking bronco that has failed to throw its rider but instead lies itself as a symbol of the physical side of Life, exhausted in the road.” 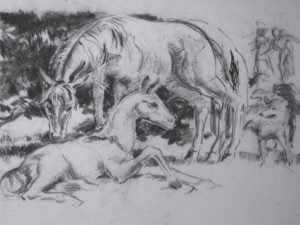 In 1965, Lumen Winter said, in a book Artists of Santa Fe: Their Works and Words, why he repeatedly returned to New Mexico to paint and work. He stated, “I believe…an artist must express something greater than himself– the Mountains, the Desert, the Rocks and the Trees; the Sun, the Wind, the Rain and Thunder, and Space with its Stars. The Southwest is this Great Source–unspoiled by superficial culture.” He repeated these same themes over and over again in his watercolors and drawings—as if seeking the perfect expression—even in his murals. In his lifetime Lumen Winter created murals in over ten public schools in the New York metropolitan area, at the United Nations General Assembly, as well as the AFL-CIO building in Washington, DC and in the insignia for the Apollo XIII astronauts’ moon mission. 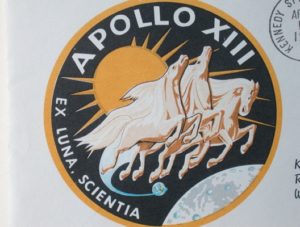 Since his death in1982, this is the first museum exhibition of Lumen Martin Winter artworks and it is highly appropriate that his first representation to the American viewing public is the wild American horse, not an Arabian or Thoroughbred, but a wild range horse in the mountains of the West.

It is my pleasure to introduce this rediscovered artist through the assistance of the fine institution of The Harness Racing Museum and Hall of Fame and I am most grateful to the museum director and her staff who made this all possible. 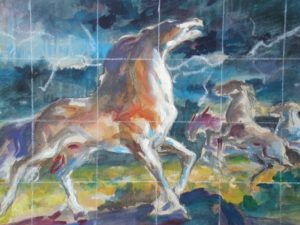 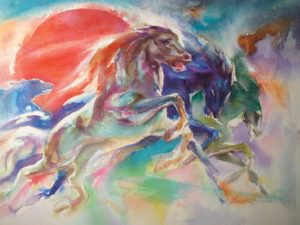