J Dann is a serial thriller. She once described her art as “lyrical abstraction.” It is an apt assessment. Her various series recall the movements of a musical score, by turn allegro and andante. Not surprising. 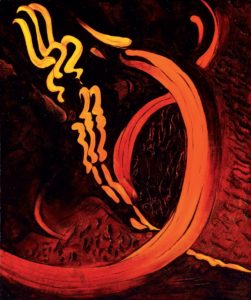 Her youthful background was submerged in music, having studied both piano and harpsichord in conservatories in Strasbourg and Paris. Growing up, concerts, museums, and galleries were the constant venues of a very cultivated youth, thanks to a highly culture-oriented mother.

This duet of her artistic bent led her to teach music, drawing and painting eventually in various venues until 2001. She participated in or created other art establish-ments, such as the Fine Arts Fair and Contemporary Arts that mixed the Arts, Music and Slam, in places like Magnac Laval and Limoges, where she now resides. That’s only the half of it. However, since 2011, J Dann has reportedly conserved her energy, reserving it for traveling and exhibiting thither and yon.

J Dann has been a busy lady. In the past two years alone, she has exhibited in France—Montmorillon, Beauregard Castle in Blois, Aix en Provence, Limoges, at the Grand Palais and the Monod Gallery in Paris. She has also exhibited in Seoul (the Franco-Korean National Assembly), the Broadway Gallery in New York, as well as Spectrum Miami in Florida.

But if her classical musical education was the dominant keynote, drawing and writing had always been a part of her life. And a good thing that was too, as a serious road accident changed the course of that life and steered her toward the plastic arts.

Her artistic expression encompasses both oil and acrylic paintings, mixed media, prints and works in India ink. A native of Louveciennes, she was familiar with the landscape that shaped and inspired Sisley and Pissarro. (She attended the Academy of La Grande Chaumière in Paris—a school somewhat similar to the Art Students League in New York.) Her images are not landscapes, but mindscapes—a language all of their own—and that is precisely the way she describes her work. For her, “painting and printmaking are like the written word…a way of self-expression, of talking…by way of gesture, forms and colors … that reveal and communicate everything words cannot.” The unsaid. The unsayable. The undefinable. The effervescent.

A poet, as well as a painter and printmaker, her images are akin to a love letter to those looking at her work—listening to the “palpitation of the heart and of life.” As she put it: “It is a gift to those who wish to receive it….It is a gift of self that we do, sharing without expectation of return. It is the breath of the soul.”

Her palette is basically tricolored, but nothing short of dramatic. Red and yellow flames spread across an ebony abyss of space. An occasional earthy shade brings us—almost—to the earthbound creatures we are.

In musical terms, one thinks about the darker passages of Beethoven’s scores, Wagnerian operas, perhaps. A touch of Carmen at times, but maybe, above all, The Firebird. J Dann’s work takes flight in every sense of the word.

If the colors are in-your-face blatant and brilliant, the forms are more visceral. The shapes spiral, they swirl, they squiggle and streak across a black background. They coil and curl, like flicks of a fire within—a molten lava of the soul, so to speak—yielding sparks that ascend and arc. Other strokes curve, scythes slicing and harvesting a darkly seared and scorched sky.

“Tre’car 17” is a perfect illustration of J Dann’s work. A tangerine solar wind seems to sweep through an ink-dark background, interlocking with an orange S-shaped swirl. Their soaring strokes engender a trail of wavy flame-like forms. 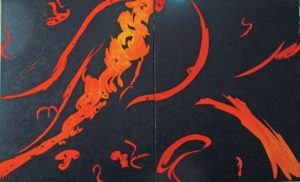 “Veines du temps…” reprieves the arc form streaks of fire dancing against an ebony sky, bursting into flame at the upper left of the canvas.

“Vertige,” while preserving the artist’s palette of orange-reds, yellow and black, is a far more organic piece suggesting the concept of an inner flame, of a “fire in the belly.” And then, of course, there is the texture. J Dann has incorporated sand in the pigment, grounding the fleeing forms onto the pictorial space. 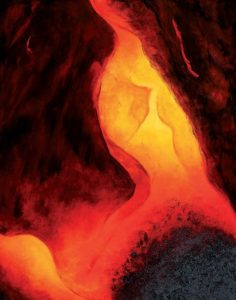 Despite this seemingly somber scenario, J Dann’s work is anything but. It is vibrant; it soars—perhaps toward her dreams. And ours.

J Dann, without a doubt, is noteworthy.