We have all unfortunately experienced some form of natural or man-made disasters in our lifetimes, whether through personal experience or even just through the news media and the internet. These experiences are usually full of conflict, devastation and politics, and often accompanied by anger and blame.

Tiffany Chung is an artist who has conducted long-term research into the geographical shifts in countries that have been traumatized by war, human destruction, or natural disaster, with a particular focus on the growth, decline, or disappearance of towns and cities, and related issues of urban development, environmental catastrophe, and associated humanitarian crisis.

Chung’s presentations of these disasters come across as factual and without prejudice in a very serene and elegant style. She does not apportion blame or show any negative emotion but only compassion and the truth as she sees it. It is hard to imagine beauty in disasters, but somehow she is able to find it and present it to us in her latest solo exhibition at Tyler Rollins Fine Art, “finding one’s shadow in ruins and rubble.”

Chung is one of Vietnam’s most prominent and internationally active contemporary artists who is also a part of the upcoming 2015 Venice Biennale.

Her current exhibition in New York features multimedia works relating to the lingering effects of three natural and manmade disasters: the 1995 earthquake that devastated Kobe, Japan; the current conflict in Homs, Syria; and the battlefields of the Vietnam War.

Chung’s project relating to the massive destruction in Kobe, Japan, a country in which she has worked extensively for many years, is interpreted through the notion of contemporary ruins, using archival video and photography as well as her characteristic map drawings.

The video and photography in this exhibition are shown in sepia tones, suggesting age and as seen from the future. There is no tabloid attempt at shock and horror but much more a calm removed reporting of just the facts.

Her meticulously detailed maps involve a complex layering of topographies from different historical periods, interweaving historical and geologic events, as well as spatial and sociopolitical changes, with future predictions and utopian visions. These are precise, colorful and yet organic in nature especially when first viewed from afar, offering cell and plant-like imagery. It is only as the work starts to coalesce into focus that it evolves into a precision map.

The section on Syria is presented via the installation of light boxes arranged as a chaotic cityscape of its own, showing images of the contemporary ruins and burgeoning refugee crisis in the city of Homs, the result of the current civil war in the country. 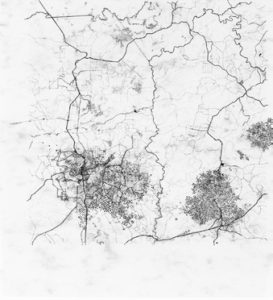 And thirdly, Chung shows her representation of the Vietnam War through her father’s eyes, a former pilot for the South Vietnamese Air Force. Archival fragments relating to his wartime experiences are juxtaposed with Chung’s current investigations of disused and ruined airstrips scattered about southern Vietnam. A particularly poignant piece is a topographical map including locations of old and now disused airstrips. They are reproduced on vellum paper which is infused with cloud-like designs suggesting perhaps her father’s point of view from the cockpit.

Chung’s triune of disasters is an exhibition of proof that the impact of violence can be depicted eloquently and artistically with understanding and sensitivity.