Elaine Weiner-Reed’s work in the New Century Artists Show, “Memories,” mines human emotion with an abstract expressionist sensibility. Like de Kooning and Grace Hartigan, Weiner-Reed does not eschew the figure in her work and uses black gestural line to great effect. Here, it is one of the primary elements as she strives to break boundaries of emotional limitations. She allows red and black to predominate in this series, of figurative subject matter, rendered with minimum detail, in a range of hues and strong lines. She, thus, provides an artistic filter that is visceral, chaotic and painful as she tries to cope with and understand transient finality. 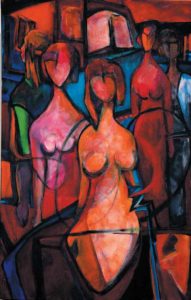 This artist has always been a fighter against the status quo. Undaunted by prosaic artistic minds throughout her career, she vigorously has created paintings and sculptures exploring uncharted places. In this show, her territory is the minefield of human emotions that erupts when there is a profound, personal loss, a rupturing of a seamless thread of existence broken forever, with which one must come to terms. Weiner-Reed accomplishes this here.

A savage palette knife slaps impastoed red paint onto the canvas in “Primal Scream” as incised, powerful, blue lines, moving across the textured surface, coalesce in a contorted female form crying out for release from the anger of personal suffering. Manifested in many guises, the figure is a combative culmination of swirling and overlapping lines, abstracted in a variety of ways, with ephemeral facial aspects glimpsed throughout. The picture surface is scraped, showing underlying texture as if Weiner-Reed were removing trappings of mundane reality to reveal anguish underneath.

The linework in “Once upon an Allegory,” is more contradictory than that in the other paintings in this series. The painting is a story of trauma where agitated forms juxtapose with the painting’s complementary colors, creating tension in the piece. Color washes over white areas with black lines almost automatically drawn in the main female figure’s torso, abdomen and thighs, expressing a corporeal narration to loss. The anatomy of the figure is distorted as if the emotions are in crisis and the figure’s chest—the heart’s seat—is filled with agitated drawing, as though the lines were a wound striking directly to the body’s core.

Weiner-Reed uses intense, vigorous black and white lines in the painting, “Suspended Legacy,” heightening its inner turmoil. Her compelling lines attack the painting’s surface creating an image that looks as if it were shattered in a mirror. The artist paints both male and female forms with slashing strokes across the hip of the figure in the forefront deforming a sense of solidity in the composition. Could it be the artist is remembering happiness gone, when the cohesion of tranquil memories was destroyed and life changed irrevocably? Is the artist documenting a life cut short, unable to realize longevity? All these possibilities come to mind when I look at this painting.

With “Doors and Secrets,” the female forms, their faces—masks—recondite and primitive, show just a slight indication of closed eyes giving them a quasi-mystical feel. Perhaps the clothed figures are the painting’s subjects, the nudes, their psychological manifestations. Weiner-Reed strips away pretense in this painting and reveals emotional rawness where circular lines, highlighting the female forms, create tension as they share the picture plane with black rectangular portal outlines. Viewing this work, I am reminded of Rouault’s use of black as the carrier of emotional content.

“Ancestral Whispers” shares some affinities with “Doors and Secrets” with its mystery, repetition of form, reticent faces and use of curved and angled lines. The painting conjures up visions of prehistoric art where the work on cave walls is infused with magic, the light flickering, as the painter tries to connect with spirits who have gone before. It is possible that Weiner-Reed is remembering the past where her recall of people is ghostly manifestation. The piece, almost monochromatic in execution, brings the black lines to the forefront, superimposed on thick paint and becoming the work’s most palpable element.

Weiner-Reed delves into life’s underlying painful context. She is not afraid to confront it as her work stretches the limits of human experience, destroying all constraints and exposing hidden themes. In this exhibit she uses strong color and line to express pain and sorrow when life is upended by loss. Her impassioned manipulation of paint has an intuitive quality to it that references so much of recalled history that is now, tragically transformed. Expertly accomplished through the use of figuration in these dramatic, abstract expressionistic works, the artist wrestles pain to the ground and vanquishes it, emerging emotionally victorious.