“When I was five and other kids were drawing trees with simple circles and lines, I drew tree trunks with bark and roots sprawling below ground,” says Irene Kieltyka, who thought of herself as an artist, even at an early age. A keen painter of nature since her childhood in Poland, Kieltyka is still obsessed with how to make her work true to what she sees. 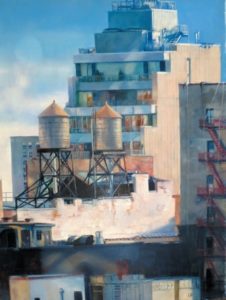 Now in her mid-fifties, Kieltyka paints meticulously observed street scenes of New York. After our interview while walking to the subway, she stopped suddenly to study the afternoon light on a building at 26th street and started taking photos. These will guide her when she returns to her Bronx studio and begins yet another painting of New York streets.

“I cannot walk anywhere and not notice what is happening,” she says. “I look at the street, the colors, the light variations, but what I enjoy most are the shapes and patterns.” Kieltyka, who is currently preparing for a show that will open at the Polish Institute of Arts and Sciences on May 14, paints in a quasi-photorealist style. Although she uses her camera to gather information, you would never mistake her work for a photograph as you might with more traditional photorealists who strive for every observable detail. Kieltyka’s work is much more fluid, casual, and neutral.

Kieltyka is quick to point out that she is not looking for a narrative or any psychological interpretation of her work, not even a heightened level of detail. Unlike many of her contemporaries who work in the photorealist style, she is not interested in social commentary. Instead she is fascinated by the street, more precisely by signs, trees, people, traffic, even piles of garbage. “The street is the only thing we have in common,” she says. “We meet each other on the street which is for all of us.”

While living in Harlem a few years ago Kieltyka could see the Apollo theater from her window. “I was really lucky because I loved living there,” says this inveterate observer of the world around her. The Apollo sign was a perfect vertical, a bright yellow sign with bold red letters. The sign is an image the artist has returned to in many paintings. In one painting dominated by the sign, she includes a man sitting on an egg crate with his back towards us, and scaffolding on a roof, a street light, and window frames which create a work dominated by rectilinear rhythms, strong colors and perpendiculars.

In a painting that features the Empire State Building, Kieltyka emphasizes that “it’s all about light.” By making the dark night darker and the lights in the building whiter, she imbues her painting with strong contrasts. “I needed the white car in the corner to be there for color and balance,” she says adding that she enjoyed the light shimmering on the plastic garbage bags.

After completing an MFA at the Academy of Fine Arts in Warsaw in 2008, Kieltyka came to this country and worked as a museum guard on the night shift at the Guggenheim from 1994 to 2005. “It was great,” she recalled. “I saw my first Richard Estes painting one night in the hallway in the office area. It totally captivated me. It was so well done, no propaganda, no sentimental story.” The Guggenheim was the ideal employer for an impoverished artist. The museum adjusted her schedule so she could take classes during the day at the Art Students League where she was encouraged by one teacher in particular, Harvey Dinnerstein, whose realistic work is in many museum collections.

After a visit to Poland, Kieltyka returned to New York and resumed work as a museum guard, though now at the Museum of the Moving Image in Queens. Like her idol, Russian realist painter Ilya Repin (1844-1930) whose reputation was the equal of Leonid Tolstoy in the 19th century, Kieltyka is incredibly prolific and hard working. After a midnight shift at the Queens museum, she sat across from three homeless men huddled together sleeping on the subway. Unnoticed she took their picture. “They are my Three Kings,” she says. “My way of painting the 12th day of Christmas in New York City.”