Viewing the artwork of the Romanian-born sculptor Viorica Colpacci, shown in her recent retrospective exhibition at the Romanian Cultural Institute, has set me to pondering the source of the power in the newest of her works. Her quest for understanding and exploring the spiritual nature of life has come clearly and strongly to the forefront of her art. 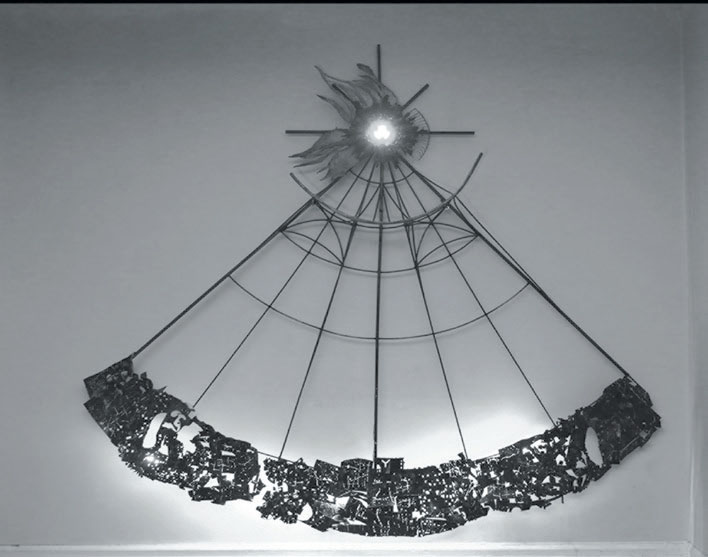 In Bucharest, she attended the venerable Romanian Institute of Fine Arts. The Institute has a distinguished history going back to 1864 and, at the time of her attendance, was named in honor of the important Romanian painter Nicolae Grigorescu. But as we know, the post-war history of the country took a turn away from it’s earlier proud cultural stance. Socialist (and eventually totalitarian) governments were not fundamentally receptive to the free thinking nature of artists, and Colpacci was forced to make her exodus before things got worse, as they indeed did. She left in 1977, the year of a catastrophic earthquake, which made life in the capital untenable. She continued her studies in New York, at the Pratt Institute, and since then has remained active as a teacher, and with organizations such as the Sculpture Guild and the Association of Women Artists. Of late, she is at the core of the Romanian Institute of Orthodox Theology and Spirituality, here in New York, and their gallery Spiritus. The beginnings of her career have a clear bearing on these most recent works, as we shall see.

Is her spirituality a response to living under a repressive government during her formative years? Are those times now just a distant memory for a mature and accomplished artist? Are the early times an initiator of this spiritual path, a gateway to a creative calling? Have they set her onto the path which she now so confidently follows, if indeed ‘follow’ is the appropriate word? You would not be likely to consider her a ‘Political’ artist. If anything, she is the opposite of this. Her concerns lie on a different plane. Americans tend to discount the influences of governmental control, due to the open nature of the society in which we live. But for Eastern Europeans who grew up in a Socialist system, politics was an every-second concern. The basic relationships between people take on a different quality when your neighbor is likely to be an informer for the Securitate. But these kind of societies ultimately fail to accomplish anything except cause an opposite reaction. The spiritual essence of human life can be repressed only so long. People who retained the capacity to rebel did so, and thus the revolutions came. Colpacci’s revolution takes the form of the inner spirit, the striving to overcome the divisions which keep people apart, and find a universal power which transcends this.

Colpacci has mastered a number of different mediums, and continues to use them with great facility. She has previously worked with glass, ceramics, metal, paint, but she has not been chained to a particular medium for any length of time. She could never be satisfied with a typical aesthetic style, nor with a single uniform medium. When she decides that a particular material has fulfilled her particular wishes, she is not afraid to give it a rest. She uses a particular medium until she feels she has found it’s place in her spiritual quest, continuing the advancement farther down her own path. Perhaps it would be better to say farther ‘up’ her path, since it is apparent that this path proceeds toward a higher plane. In the new sculptures, she has largely abandoned the painting of surfaces, with the bright colors used previously, leaving them in a natural, weathered or subdued state. It is skeletal and simpler and perhaps less decorative. Previous work of painted steel forms using bright colors and color contrasts were highly luminous in their own right, but one can only think that this was not sufficient in its clarity for her. The search for a universal quality in her earlier sculptures seems tied much more to the materials. The new metalwork is presented more as itself. It is structural, almost like a drawing composed of thick steel lines. But her most recent works go farther, through the incorporation of lighting devices into the works themselves. Her desire to illuminate becomes literal, and the subtlety of this execution is in the light and luminosity and tranquility of these late works.

The lights are diffuse, but also employ small point sources. One can think of stars, suns, glowing nebulae. The viewer is invited to contemplate planetary motions, elipses and orbits; Kepler’s laws of motion without the math. The cosmos, but not literally. No galaxies of Vija Celmins, or faux-Hubble telescope images. She is suggesting to us that there is no ultimate difference in the quest of absolute science and absolute spirituality. The goal is that of complete understanding and complete experience. It is a circle in which the paths of science and spirituality meet in harmony, after journeys which begin in opposite directions; but the place of their meeting is the same. It has been called the Singularity, and I cannot disagree.

It is significant that Colpacci has used basic geometric forms as squares, circles and crosses extensively in her recent work. Her spiritual concerns have moved her to these forms. Any abstractness in her spiritual concerns are echoed in these abstract, yet universal forms, moving the works toward a purer, more elemental expresion. Circles contain squares, and triangles barely contain radiating lines which burst outward from their confines. We see large forms utilizing shapes employed in many religions. Mandalas and Celtic crosses come quickly to mind. Many of her titles are clearly Christian: “Trinity,” “Crucifixion.” These titles, with their references to an established religion, maintain a specific association that a particular group of humans have created, in our continual attempts to understand the abstract nature of the Spiritual, through our many faiths and religions. Although she applies these titles to her recent works, the works themselves still do not seem ‘religious’ with a specificity to a particular religion. You don’t need to be Eastern Orthodox, or even a Christian, to appreciate the message. They are approchable and comprehensible to a multiplicity of faiths and creeds. This is the universal thread that connects the imperfection of the human mind with the perfection that human religions seek to explain. Other titles are less faith-specific: “Cosmogony,” “Sacred Sign”; the universal quality is more apparent. One work, titled “Pantocrator,” perhaps best combines these two essences, being the name of a specific image of Christ in Eastern Orthodoxy, yet at the same time describing this image as being a representation of universal power or omnipotence. And the work with this title? A circle inside of squares, inside of another circle. All lit from within. I can’t help feeling that the power evoked by the title extends beyond the specific Christian image, to that of the Universal. You be the judge……

Which brings me to the most specific and quintessential of her works, “The Ladder.” It is all spelled out here. It is the most direct expression of her desires, her clearest statement of desire and communication. It is her greatest gift as an artist, her creation of a pathway for the viewer to join her on her quest. For her, this ladder is still a tool, but a tool with a higher purpose, and not at all abstract in this purpose. It is her invitation to the viewer to climb higher with her, toward the light above, to the location where the earliest natural religions placed their sun god. Colpacci’s sun is gentle and soft, welcoming and not blinding, not fearsome. This is a sun that draws you to it, to it’s embrace, not to the doom of Icarus who dared to get too close. It is the Source above us, a gentle sun, the original Godhead. Colpacci is telling us that we are all welcome here.