The Italian artist, Gene Pompa could almost be termed an “anti-Impressionist,” because while the
Impressionists sought to capture the effect of light on landscape, Pompa endeavors to evoke landscape’s actual substance. Which is to say: Pompa literally constructs his relief-like pictures in considerable detail with tactile daubs of thickly built-up oil pigment, evoking the very texture of the bark on the trunks and
individual branches of the trees in his glowing nature scenes with thick, yet precise neopointillistic
strokes apparently applied with a fine-pointed brush (although according to an artist statement, he also employs a spatula). Each leaf, each blade of grass on the lawns below is delineated as a discrete entity
in a painstakingly detailed neo-pointillist technique akin to that of Seurat, lending each of his compositions an almost hologramatic materiality. Indeed, like Seurat, Pompa obviously endeavors to impose a sense of abstract in the austere composition of the oil on canvas he calls “Primavera.” 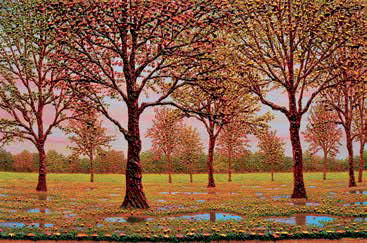 Here, two verdantly blooming trees are seen in an expansive sun-splashed meadow, set against a clear blue sky, their slender trunks supplying vertical contrasts to the flat lay of the grass-covered land, bordered by thin areas of dirt road near the bottom of the composition. The painting possesses an
underlying sense of a geometry that often occurs in nature, but is rarely defined so precisely in painting, in a manner which might even have pleased a stickler like Mondrian. Yet it is atmospherically open and airy as well, with the clear blue of the sky showing horizontal wisps of cloud as slender as jet trails, and the leaf-laden branches on the two lushly blooming trees appearing to sway lazily in a soft summer breeze.

Somewhat more complex is “Specchi d’autunno,” in which several more trees speckled with a chromatically variegated spectrum of autumnal leaves stand as straight as sentries in a leaf-strewn meadow, their trunks mirrored here and there in puddles of rain water on the grass below. A particularly
lovely feature of this canvas is the sky, which glows through an intricate network of graceful tree  ranches, tinged with tints of pale, purplish pink in a manner reminiscent of that offshoot of the American Hudson River School of painters known as Luminism. In Pompa’s version, however, another aspect of
the painting’s appeal is the unique textural contrast he achieves between the thin, almost translucent glazes of diluted oil paint which he employs to evoke the smooth, ethereal surface of the sky and the tactile impasto of the limbs and leaves.

Although both his parents are Italian, Generoso (thus the sobriquet “Gene,” with which he signs his work) was born and spent part of his childhood in Alexandria, Egypt.  But the family returned to Italy and settled in Rome when he was ten years old. There, he grew up in an artistic environment, since both of his grandparents were opera singers, his parents were interested in all the arts, and his siblings have all gravitated toward creative pursuits.

In the 1980s, after a long sabbatical following the death of his father, he began to paint again and by the ‘90s his work veered between surrealism and landscape painting, as he developed his unique oil relief technique. One can’t help wondering if the subtle patterning of his intricately paint-piled forms
was subconsciously influenced by the sinuous Islamic script seen everywhere in Egypt during his early childhood there. In any case, Gene Pompa has evolved a visual language all his own that frequently touches upon the sublime. Ed McCormack